I love Russulas. There’s something so solid about them, something so sure. I love the colors of their caps, in all shades of warms and cools, atop a stout stem. There’s a certain lack of ambivalence about them that makes them so assuredly Russulas when you find them in the forest duff. Just don’t ask me to tell them apart by species. And as I learned at a New York Mycological Society talk by Noah Siegel, co-president of the Monadnock Mushroomers Unlimited in New Hampshire, some mushrooms (I forget which) that were never considered as Russula, are indeed, thanks to DNA sequencing.

According to the talk and recent science news in the media, DNA sequencing is rearranging relations of all kinds of taxa, resulting in renaming and rethinking of where things are on the evolutionary tree. Much confusion and head-scratching among the scientific community ensues.

Regardless, Russulas are a fun way to indulge and experiment with rich colors when painting. And I will still be excited to find them in the urban forest. 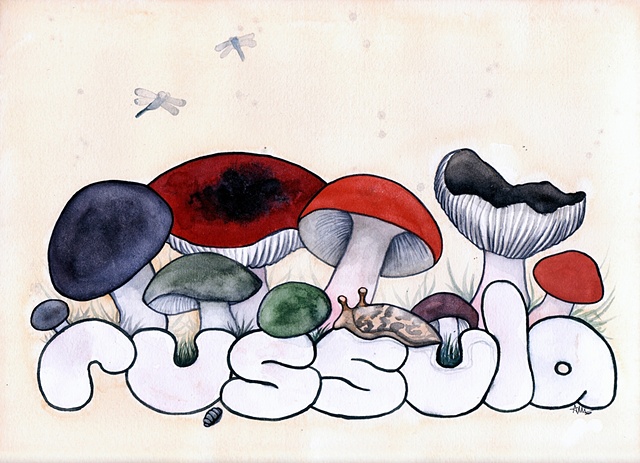